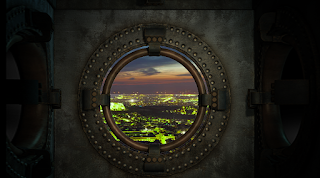 This is another installment of my "Untitled Story." The preceding portion can be found here.


Gregory Santo sighed at the stack of parchment glaring at him from his desk. This latest batch of border reports would seem less daunting if it represented more than a single day. Looking around his cramped workspace revealed similar piles stacked on chairs, overflowing shelves and collecting dust in the darkened corners of his time room. The Council had assigned him the honor of serving as interim security coordinator but any comfort taken from the position being temporary faded little over five years ago.

Pushing his chair away from the desk, the young acolyte stood and picked his way across the room to a leaded window. Throwing the latch, Gregory swung open the small porthole hopeful that the stacks of paper behind him would suddenly rush through it to freedom. Barely a rustle could be heard as the night air was heavy and unmoving. Father Santo sighed deeply and watched the sun throw long shadows across the sky on its way to bed.

A young friar entered the room and produced a small wrench from the small pouch at his waist. Carefully weaving between the piles of parchment, he opened a small cabinet in the far corner of the room. Gregory watched the young man dutifully adjust a sequence of bolts with the wrench until a pale, greenish light began to flood tubing which extended from holes in the wall directly above the little control cabinet. With a satisfied nod, the young man closed the cabinet, wove his way back to the door and quietly slipped back into the hallway outside now bathed in the same greenish hue.

While candles still lit most of the temple, it was Father Gregory himself who had championed the use of lumens in areas where a fire could prove disastrous. After the main hall had been outfitted with the glass tubing and control boxes, the records hall and a few of its offices also had this new marvel installed. Plans had been drawn up for an entire retrofit of the temple but the work had proved more complicated than originally estimated. In nearly two years, only the records hall and Gregory’s office were the only areas that seemed to work as designed.

As the last rays of sunlight faded from the horizon, a greenish haze began tracing a route between the buildings of the city below. The lumen system currently being installed in the temple was derived from the same principals as the city lights that were in place longer than anyone could remember. Running around as a young boy, Gregory and his friends would often go looking for the source of the strange light. Once, one of the more adventurous lads threw a stone at a lumen. There was a horrible whistling screech then sucking sound before the light went dark. For weeks, the light remained dormant as the odd transparent membrane healed itself. Father Gregory remembers when the light suddenly made a hissing sound and a gentle ‘pop’ before the familiar green glow poured out from it once again.


Gregory Santo pulled the window closed and fastened the latch. In his doorway stood a tall, thin silhouette of a man. Moving quickly to clear some paper piles, Gregory made a grand show of bowing and waving the man into his little office. The man slowly moved from the hallway through the piles of carefully balanced paperwork to the chair young Santo had prepared for him. Gregory hurriedly sat down behind his desk.

As always, please use the comment section below to let me know what you think. Should I continue or abandon this story? Too early to tell? Follow me and be the first to know when another installment is ready.