Sous-vide or not sous-vide? 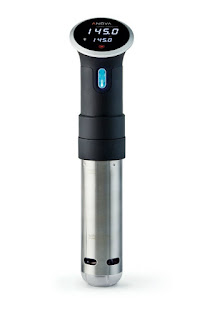 Not long ago, a good friend of mine had me over for dinner. He kept going on and on about a better way to cook meat and how I had to try it. I'll admit that I had serious doubts that he could boil me a great steak. I stepped back from him waiting for the gods of beef to strike him dead where he stood. I cringed further when he showed me the amazing cuts he had procured for our culinary adventure. My friend was trying to convince me that sous-vide, a method of cooking vacuum-sealed foods in a vat of temperature-controlled water, would be worth the wait. I decided to look it up to see if it's legit:

First discovered in the late 19th century, the sous-vide (pronounced "soo veed") really became popular in the mid 1970's when a restaurant in Roanne, France began preparing foie gras with the technique. Later in Virginia, the chief scientist of Cuisine Solutions conducted a series of experiments to determine the ideal temperatures at which to prepare different foods. From this research, Bruno Goussault went on to train some of the world's top chefs in sous-vide methodology.

Reading on, it seems that the science of this cooking method needs to be rather precise and carefully monitored or the food ends up less than desirable. We're going to ruin these steaks for sure. I stare at those gorgeous cuts of meat being shoved into Ziplock bags and then sealed shut. The temptation to lunge across the table and rescue these marbled beauties from their watery grave surges over me moments to late–the bags are snatched away and suspended in a big bucket of water. I pray to Bovis, lord of the grill, for forgivness.

My friend then pulls out this sleek Anova sous-vide device. At first I think it's a light saber but it slips into the vat of water through a handy hole, perfectly cut in the rubber lid his 18 quart Rubbermaid container. He powers it on, fiddles with his iPhone for a few moments, and says, "abracadabra!"

We went out to the living room with a couple of drinks, talked--projects we were involved in, plans for world domination, the usual. The time passed by quickly enough and eventually my friend's phone chirped that the meat was ready in the other room. I got up thinking we needed to rescue the food before it overcooked but my friend assured me that this was more or less impossible to do and we were in no hurry.

Without a lot of fuss, we removed the steaks from their bags and dropped them on a hot skillet for a minute to sear them with a little butter, black pepper and salt. I looked around and, other than the skillet, there was nothing to clean up–no grill brush or sticky trays of raw meat. My friend just tossed two Ziplock bags in the trash and emptied the water into the sink and left the container to dry. My friend asked me to grab the two plates he had set aside as the impending meal sizzled atop his stove. At this point, the smell was incredible and the steaks looked like something any grill master would be proud of. We plated the meal and sat down for the first cut...

When I got home, I told my wife that we should be expecting our Anova sous-vide cooker within three to five business days. She raised her eyebrows, looked out at the monster grill I had installed years ago and said, "you're going to boil me a great steak?"

This ought to be fun.