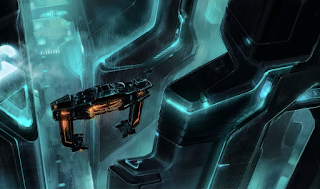 A single recognizer moves quietly down a forgotten corridor of structs–its destination a brightly lit gate floating 200 kilocycles ahead. Inside, a program makes the proper calculations to halt the craft before virus detection scanners pick up their presence.  Once in the right place, this program sends a signal to its user.

From a terminal in San Francisco, Edward transmits an electronic address and a new mission.  Several years ago, he would not have needed to sneak around and break into a system like this.  Back then, he would just have the Master Control Program do it for him. Things are different today. No longer are the resources of Encom–one of the most infamous names in the valley–at his disposal.  Today, he's lucky his parole officer even allows him to have access to a terminal at all. Dillinger is name all but forgotten now and today that suits his purposes just fine.

The recognizer remains motionless as its program finishes probing the system to record which sentry patterns are not there.  There's a brief pause after reporting all findings to the user before a downstream of information arrives. Moments later, code begins to shimmer across the recognizer's surface. With a new coat of digital paint to masking them from the sensors, both pilot and craft resume moving toward the gate. Black matte framing with a rapidly moving grid of high energy beams dance in staccato patterns across the hull of the recognizer. Down below, a small army of tanks can be seen in the pulsing glow of the gate's beams. Failure here means instant de-resolution. All functions scrubbed from existence. Death.

Dillinger taps his fingers lightly on the table and stares intently at his screen. Nothing is happening. There is no progress bar to keep him occupied. Just the steady, relentless blink of his cursor. From the corner booth he managed to snag, he can see Alcatraz and panic begins to creep in like morning fog. Detection now would trigger an investigation and his digital fingerprints would send him right back to the dark luddite box they'd kept him in for the last ten years. Back on the laptop display, nothing had changed. Everything was still except the cursor which continued to blink.

On the other side of the screen, beams of energy dance across the recognizer as it moves toward the end of the sentry checkpoint. Suddenly, one of the beams locks onto a part of the code covering the recognizer. When the beam stops, the recognizer becomes locked in place–tethered by the energy. Other beams begin to retarget neighboring quadrants of the ship while the tanks down below start cycling up their power cores. The pilot program moves to a panel on the main dash and swipes the air above it to reveal a self-destruct control.

With as much warning as it had began, the sentry's detailed examination concludes without incident and the recognizer is allowed to continue past the checkpoint into the system. Once inside a sector, recognizers are equipped with a digital toy chest of ways to probe, modify or crash any system. In the middle of this sector is an Input/Output tower. As they approach the tower, a probe detaches from the bottom of the craft and moves to an interface port on the side of the tower.

The laptop springs to life and begins displaying row after row of system logs. Dillinger is in! All told, this is the seventeenth system he has compromised since regaining his freedom. With this many systems reporting their traffic to him, all that's left is to wait. For the last decade, one thought has occupied Edward Dillinger's mind: Make Flynn pay. With the systems he now controlled, it wouldn't be long before he was pulling the strings again. He'd spent years planning for this. Countless nights replaying his failure. Of course, that is all in the past.  The future is revenge. The future is now.


This is another story idea that I'm playing around with. As with some of the others here, if you like what you've read and want to see more, please comment below and let me know which tale you'd like me to expand further.