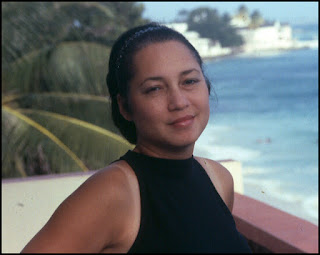 My son and I were playing yesterday and, as often as I can, I had music playing in the background. We have a wonderful device called a Sonos which allows me to select and play my MP3s anywhere in the house. I remember that, as a child, there always seemed to be music playing somewhere in our house. I also remember the house not feeling like home unless there was something playing: Calypso, Classical, Air Supply, Hall & Oats, Neil Diamond, Barbera Mandrell, Earl Klugh or Chet Atkins. Of course there were many other artists, many other musical genres and no matter how little we had, I distinctly remember feeling 'richer' for it somehow. Music is a gift I can't give to my children enough.

Yesterday, we were listening to a playlist I created featuring Jazz piano performances from various artists. At one point in the playlist, an arrangement of the Beatle's song, "Blackbird" began to play. My son stopped in the middle of our little game, looked at me and said, "I think this song is 'Blackbird' Dad."

"Yes it is," I responded. "Do you know who really loved this song?"

He thought about it for a minute and then furrowed his brow and said, "Who?"

He seemed satisfied with this bit of trivia and returned to his game. Looking at him playing I began to think about all the things my Mother would never see in my children. I began to well up inside at the thought of my kids never having the chance to know her. I felt deep regret that my Mother never got the chance to meet the granddaughter who seems to have inherited her sense of humor, curiosity and will power. All of these things washed over me yesterday as I watched my child play, oblivious to his loss.

Two years ago on this day, my Mother passed away. After several years struggling with Multiple Myeloma, my Mom was gone. Part of me still hasn’t forgiven God. Part of me feels guilty for not being there when she died. Part of me is beginning to move on as if it’s no big deal. Part of me wants to sleep—a lot.

As I write this, however, I’m reminded of her smile and the way she enjoyed getting into trouble. I look at my daughter who, even though she’s barely a year and a half old, has the same devilish look of mischief in her eyes my Mom would have. My child can’t speak yet but communicates worlds of trouble by simply flashing my Mother’s trademark smirk.

As I do various things with my family, even on this day, I can’t help but imagine what my Mother would be doing, how she would be reacting to the scene in front of me. As I prepare to cook some of the dishes she used to cook, I see her smiling at me with pride and it hits me. . .

In my son’s laughter, she’s still here. In my daughter’s eyes, she still looks at me. In the food I eat, in the games I play with my family, in the projects I’m trying to complete . . .

For those of you who knew her, you know what I’m talking about. Those of you that haven’t had the pleasure stop by and I’ll introduce you to her. . .