This little light of mine... 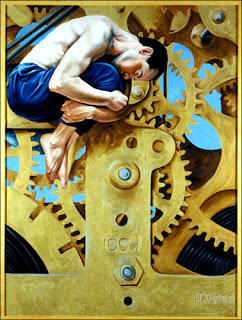 I believe that each of us has a part to play in the shaping of our world. Some influence the course of events in grand, sweeping strokes open to the scrutiny and criticism of all. Others simply keep the wheels turning my maintaining status quo—both are equally valid forms of social participation. In the last several years, however, I've noticed a trend both in myself as well as our community at large which seems to be taking over without much resistance. Rather than utilize the full extent of our abilities, we seem content or even motivated to curl up in the fetal position in order to establish and maintain a common standard for the social machine. These days, it seems as if we are more interested in who's feelings will get hurt than by where we're headed.

The inner workings of a clock are a collection of many different gears, springs and various mechanisms. Each, while vastly different in scale, importance and function are vital to moving the clock forward through time. If each piece of the machine were to suddenly be the same as every other piece, things would grind to a terrible halt. I have found that in recent years I have done little to realize my true potential—my main excuse being that of wanting to share the joy of discovery with those around me and not before they're ready to take on the adventure with me. I realize now that this is merely the ultimate stall tactic. It will be in my actions that I will finally share my adventures—not my coaxing, pushing or waiting around for others.

Recently, I've come across this passage which has moved me emotionally and intellectually. Written by Marianne Williamson in her book, "A return to love," the text deals with our ability to sell ourselves short. Entitled, "Our Greatest Fear," the passage reads as follows:

It is our light , not our darkness, that most frightens us.
We ask ourselves, who am I to be brilliant, gorgeous, talented and fabulous?

Actually, who are you not to be?

You are a child of god.

There's nothing enlightened about shrinking so that other people won't feel insecure around you.

We were born to make and manifest the glory of god that is within us.

It's not just in some of us; it's in everyone.

And as we let our own light shine, we unconsciously give other people permission to do the same.

As we are liberated from our own fear, our presence automatically liberates others.


I've started writing again because of this text. I may not be the brightest in the world but I intend to let this little light of mine shine.