Old enough to look back 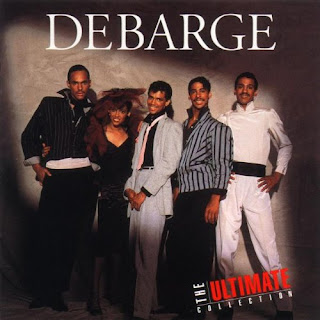 I remember looking at old photographs of my father and laughing at how silly he looked. His response always began with, "well back then..." or "in those days..." And I'd laugh some more as he'd patiently explain that it was once considered 'cool' to look that way. I can clearly recall lecturing my dad on the perils of black socks and tennis shoes as I made swishing sounds pacing in my parachute pants—nothing says 'cool' like a million zippers to nowhere. My son may laugh at my 'Miami Vice' look or scratch his head when trying to figure out why his father wore 18 outfits at the same time to achieve the ultimate 'layered look,' but he will not laugh at my music!

That's right. We're talking about Debarge! Just look at them. These guys are cool. The curly mullet, the shoe-string ties and up-turned collars. Is the guy on the right wearing a karate outfit or a band uniform? I don't know and I don't care—Debarge is so hip they can barely see over their collective pelvis. Ok, looking at them now, they do look kind of silly. The sad part is that I was a poor imitation of these guys. So imagine, if you will, attempting to look like them but not being as 'cool.'

While their look may be laughable now, their music still takes me back and brings a smile to my face. Sure, it may sound at times like the Bee Gees soprano section but the songs they sang were fun and addictive—a reflection of much simpler times. Now that my son is growing up in a world where my father's era of fashion will soon be back in style, I'll be the one making excuses while my dad and son get to point at old pictures and laugh. Thank God there is no evidence of my Howard Jones phase.