The little director who couldn't 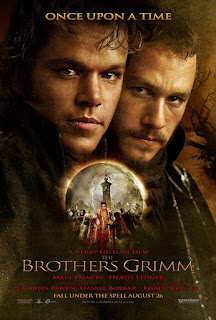 The Brother's Grimm is no fairytale. This film (as released) is one of the most disappointing and painful experiences I've had to endure. It was Shrek without the wit. Terry is plagued by rotten luck when it comes to shooting a film or even getting one released. This bad luck has also cost him the clout needed to maintain creative control. Without that control, the film manages to break through the guard rails of good storytelling and plunges into the abyss of mediocrity. What we have, instead of brave and bold storytelling, is the tale of a Studio's might stamping out the passionate flames of a brilliant director.

I am a long-time and die-hard fan of Gilliam's work. I consider him to be a cinematic visionary and a master of wonder. All of his films bring a heart, warmth and depth outdone only by their lush characters and deep visuals—except this one.

If there was something to be salvaged from this poorly cobbled script, I honestly believe Terry did it. I also believe that what magic Mr. Gilliam may have weaved was lost on the studio's cutting room floor. In Hollywood, most tales are interchangeable and generic enough that you can rewrite, slice, dice and splice them together many different ways and get wholly different films from the same footage. Not so with Terry's work—machinations so intricate that removing a scene, requiring him to change some dialog or simply asking if the 'tone' of the piece be altered can bring down the entire house of cards.

I hope that Gilliam will be allowed to re-cut the film for it's DVD release. Perhaps then I'll be able to see how much he was able to accomplish with the little room (or script) he was given. I don't blame Gilliam. I blame the studio. It is painfully obvious which scenes were battles lost and where fragments of soul were blindly removed from the story. That the man continues to try and tell enchanting tales in the cold hard reality of the Hollywood machine commands nothing less than awe from me—Don Quixote could not have appointed a better spiritual successor.

I'm not going to discuss the film as I don't think we've seen it yet—just a faded shadow of what Terry Gilliam intended.