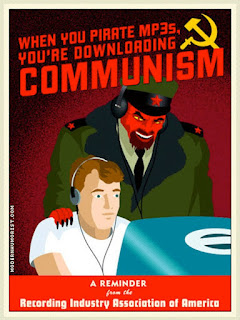 I saw this cheerful image (courtesy of the RIAA) and found myself smiling. "When you pirate MP3s, you're downloading COMMUNISM"—the very thing erroding our fine society today. The U.S.S.R. didn't dissolve, they simply became hackers and have secretly been uploading 'communism' to the internet. What began as a 'hippie' open-source mentality was really communism striking back at our capitalist way of life. Linux was really developed in Siberia as guards with AK-47s paced above the programmer's cubicles. Use FireFox and take a bite out of that big anti-big-business pie with all yer other red friends.

Remember that each time you download that pirated copy of Gigli we're one step closer to having our own 'Checkpoint Charlies' between states. Seriously though, the various industries out to protect their gifts to the world (music, film, software, etc.) are kind of going about things the wrong way aren't they? If you look at the little guys in software, there's a practice known as shareware or 'try before you buy' employed. While this doesn't stop pirates from hacking or cracking their software, it's still a deterrent to some of the more 'casual pirates.' As for companies whining about a loss in profits, when a piece of software starts to require a second mortgage, people tend to look for alternative methods of software 'evaluation.'

As for movies, music, games and the like, these works are harder to explain away. Perhaps it's the 'getting away with it,' or simply that some people are too cheap to pay $12.00 for a CD. Movies too expensive at $20 while games even more so at $50 a pop? There are rental services like Netflix or Gamefly that allow you to have an infinite library of media sent to your mailbox.

Is pirating wrong? Sure. It's stealing. Are the peasants forced to resort to desperate actions? Sometimes. I'm sure, however, that regardless of how things ultimate play out, the communists will be the ones smiling in the end.