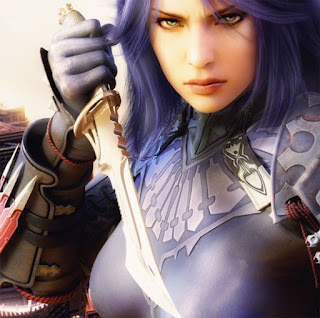 Ever since PONG, I've been fascinated and sometimes obsessed with video games. At one point, I remember long summer nights in front of my IBM monochrome monitor exploring the mysteries of Colossal Cave. These days, games have become so much more sophisticated that entire worlds are fleshed out for our curious alter egos to explore.

Games such as Guild Wars (pictured here) offer up a long and engaging story to work through while other titles simply present a vast world for you to discover at your own pace. No matter how cinematic or sophisticated the gameplay becomes, however, the thrills, immersion and wonder of that old Cave still haunt me. What has been lost since the days of the old text adventure? Is it that we've allowed our creative minds to become lazy and therefore require game designers to fill in the blanks with more polygons or do we simply lack the patience to fully adopt each new world's mythology? Perhaps the problem it is the abundance of these games which dilutes the experience of a single adventure—get stuck or bored with your current game and there are a dozen standing by to become your new time sink.

As an avid gamer for over 20 years, I've begun to wonder if I'll ever feel the immersive sense of wonder brought on by Infocom or the old Sierra adventure games. Maybe I have become jaded over the years—many a gamer lost faith during the dreaded CD-ROM/Full Motion Video 'Game' era—and look at today's over-licensed, cross-promoted clones as the standard for the future. Perhaps I frown upon today's meager offerings because I hold out hope that a new generation of entertainers will engage us with virtual delights previously thought unmarketable.

I believe that ultimately all entertainment will be interactive in varying degrees. Maybe it's time I start sharing my ideas here in the hopes of fueling a new movement, a new evolution of storytelling. I wish to help usher in a new era of wonder. Can you imagine it? If yes, let's dream together.