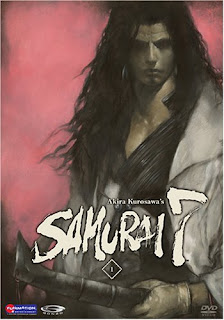 I'm always excited to find another epic tale. Based on the Akira Kurosawa classic Seven Samurai, this anime series retains the concept of a rag tag group of heroes thrown together against insurmountable odds. As an animated series, the artwork is a hybrid of traditional cell and computer generated images. Also, while the anime faithfully recreates the original beat for beat, it offers up its own twists and tweaks as well—the greatest of these being the era in which this all takes place. Samurai 7 is set in the future.

Giant mechs powered by samurai who have given up their bodies to control these leathal machines now terrorize the countryside. Villages have no choice but to pay the harsh extortion fees. All villages, that is, except one. In this town, the oppression has forced them to seek out mercenaries who will fight off the mechanical bandits in exchange for their only source of value—rice.

The first DVD in this series essentially lays the ground work for each of the characters and introduces five of the seven samurai who will wage war on behalf of the villagers. While slowly paced and with minimal action, the series does hint at things to come with some skirmishes between mecha-humans and our heroes. I was hoping for more on the action side (a la Ninja Scroll) but found myself yearning for more as the final credits rolled on disc one. It is difficult to guage any series from the first disc but something tells me this will definitely be one to watch.